Twists and turns and the unexpected

- December 07, 2019
Sometimes the story takes over and as a writer you lose control over the entire situation. They were supposed to turn right but now they are turning left. The hotel was on the right, nothing but an abandoned sand pit on the left. They were on their honeymoon now they are headed for gloom and doom.
As a writer this happens all the time. You intend for the story to go one way, and it just takes on a life of its own. The romcom on the beach becomes terror in the topiary. We all remember Gilligan's Island and the 3 hour tour.
But isn't that what makes any novel worth reading? The unexpected. I read a story just the other day. It was well written as far as the use of language. The characters well developed. The idea good. But the story had nothing unexpected at all. Not a thing. When it ended I thought, well, that was disappointing because really, nothing happened that I didn't expect. I don't like knowing what's going to happen, for me it takes all the fun out of it. For me, predictably is the kiss of death.
Which brings me to my current acute case of writer's block. My characters did something totally unexpected. Good for the story, bad for me, the writer. I have no idea what happens next. It wasn't in the plan. Even though I am the one creating the storyline, sometimes the characters themselves take over. I have no choice but to follow their lead.
Imagine if Juliet would rather run away with Romeo's cousin. Or what if Sherlock fired Watson?
Which tells me that it's going to be a great story when it's done. If it's ever done. Possibly over dramatic but really, if I don't figure out what they should next, I'll have to write an entirely different story while I wait for that tiny stroke of brilliance to occur.

Popular posts from this blog 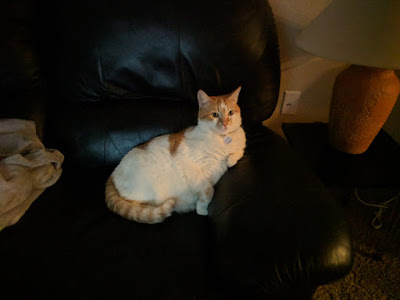 Darwin likes to hop up on my desk. From there he leaps over to the bookcase, the top of which is currently occupied by a large TV, unplugged. Out of order. He scoots by the TV and jumps down to the other desk. This is his favored route. I liken it to when …
Read more

How fictional is fiction anyway?

A common question from readers relates to how real characters and incidents in a fictional novel are. Sometimes the answer is obvious. Or seems to be. If you're an avid SciFi reader or Fantasy reader, clearly many other-worldly beings and events are fictional. Make-believe. Never gonna happen. But even characters and events in these genres have an elemental truth to them.

There are so many times a story leaps off the page as if it could be true. The characters real. And leaves the reader wondering whether the writer has based their story on personal experience.

Often that answer is yes. Or no.
Or might be.

The truth is a mixture of all of the above. Writers do tend to incorporate their own personal experiences into their writing. How much is dependent upon what they are writing and whether it's relatable. Writers also tend to not answer the question. Because what fun would that be?

My debut novel, All About Annie, is a classic example of how this all comes together. The book, …
Read more